Starburst is the perfect pokie for those nostalgic players out there! You’ll be transported back to 2012 with this classic game filled with immersive symbols and amazing wins!

Starburst is a brightly-coloured casino slot, filled with beautiful icons surrounding a galaxy-space theme. The graphics shimmer softly on the screen, making you feel like you’re among the stars, accompanied with the relaxing audio effects.

Even though the game was released a decade ago, it is still a fan favourite. While other games have been given updates and upgrades to look more modern, Starburst still has the vintage feel to it which many people are drawn to due to its element of nostalgia.

However, players aren’t only attracted to Starburst due to its vintage feel, but also because of its modest level of volatility. This means that your bank account won’t suffer any real damage when betting with this pokie. 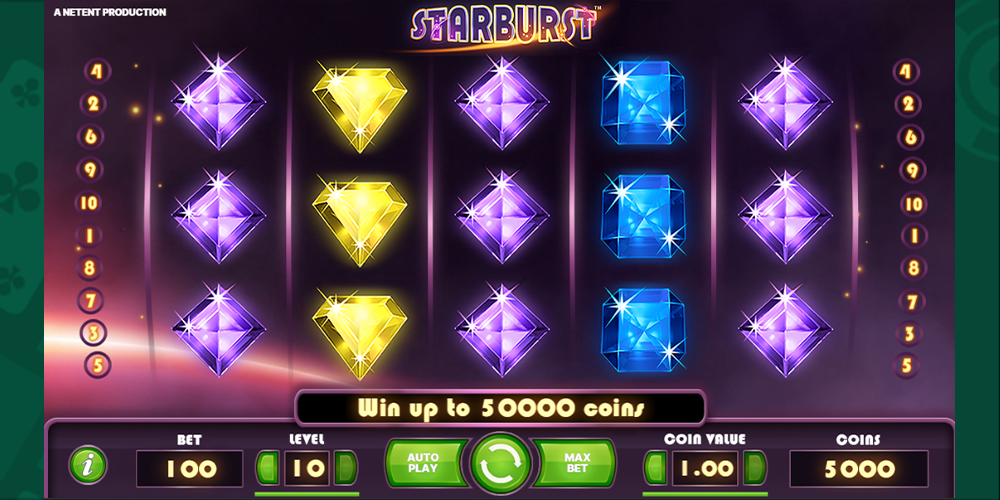 You can play this amazing pokie for real money and be in the chance to win big! Playing for real money means that you will place bets using your own money, and then withdraw your winnings back into your bank account.

That’s right, you can play this game for free! You don’t need to bet any of your hard-earned money thanks to the game’s demo version. On the Netent Website, you can learn the ropes of the game and familiarise yourself with how it’s played before using your own money.

All You Need To Know About Starburst

Let’s take a closer look at this pokie and what it has to offer you!

While there aren’t any multipliers or scatter symbols, which might be surprising to casino players who are used to those symbols popping up, there are two important symbols you need to keep an eye on during the game: the ‘bar’ and ‘7’ symbol.

A re-spin is triggered by the Starburst wild symbol, which can be found on reels 2, 3, and 4 and spans the entire reel. Five re-spins are the most that a player can get.

Players can also stop the reels from spinning by repressing the ‘spin’ button at any time during the game. While it technically isn’t significant, it does give the players a sense of control over the game and over their winnings, making the game that much more interactive and fun for the players.

While the game lacks some of the most common features, such as bonus rounds, it certainly makes up for it with the below features.

Wild symbols are the primary bonus symbol in the Starburst slot game. They will help you in forming winning combinations by replacing other symbols in the game that pay out. In addition to this, whenever a wild symbol lands, it will grow to encompass the entirety of the reel it landed on.

Matching symbols along a line that extends from left to right across the reels is typically required to win at a slot machine. On the other hand, our Starburst slot machine pays out rewards not just from the left but also from the right. Due to this, your odds of winning are increased, and Starburst has quickly become a fan favourite among gamers from all over the world.

While free spins and bonus rounds are not available in Starburst, the free respins feature is triggered when expanding wilds appear on an active payline. The reels will spin again after each time a wild grows to cover an entire reel; nevertheless, the wild will always remain in its original position. This can be activated an unlimited number of times, giving you the chance to rack up some serious winnings!

Players don’t need to be glued to their desktops in order to play this online pokie since the game can be played on mobile phones, both android and iOS. This allows players to play on-the-go, anytime and anywhere! 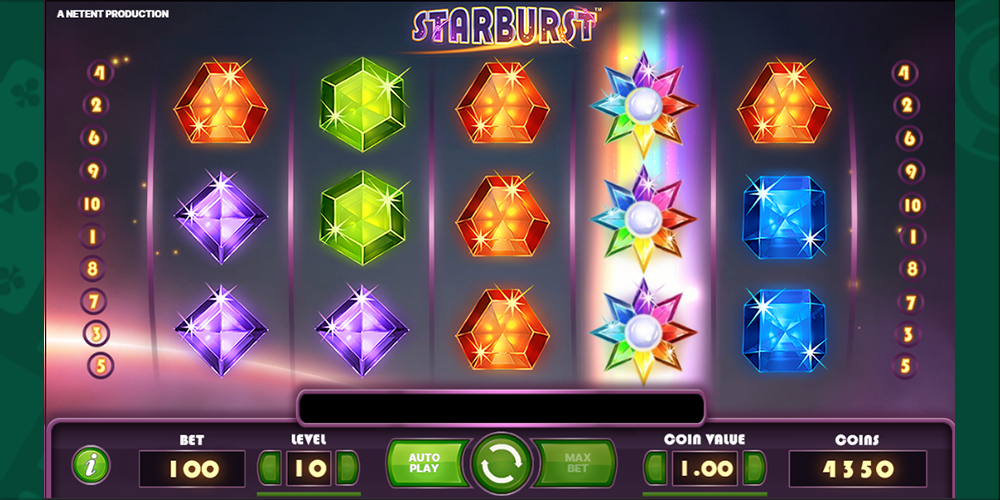 Before jumping straight into the game and celebrating when the symbols pop up on the screen, it’s important to know how much each symbol is worth.

While you will surely celebrate whenever you see the ‘bar’ symbol, make sure to keep an eye out for the real deal: the wild symbol. This symbol can substitute itself with any of the above symbols which will create a winning combo! Moreover, this feature will be active for an extra 3 re-spins.

Everyone loves attractive bonus features, and Starburst is here to deliver!

In the event that you land a Starburst bonus symbol anywhere on the reels, the wild feature will be triggered, and it will remain in place even while the other symbols transform. If the Starburst symbol appears three times in a row, the player receives an additional number of re-spins.

In addition to this fantastic bonus, there is also one called the Two Ways Win feature, which indicates that you have a chance to win if three or more symbols appear on the reels in any direction from left to right. The fact that it gives you an additional bonus round increases the likelihood of your coming out on top.

Since winning combos can be paid out both left to right and right to left, Starburst for real money is a favourite among casino players. This is in contrast to other pokies, in which winning combinations are only valid from left to right. Players have the option of placing wagers of as little as $0.10 each spin or as much as $100 per spin, using coins with values ranging from $0.01 to $1.00.

The Starburst slot machine does not have a progressive jackpot; yet, the top prize can be worth as much as $50,000, making it equivalent in size to the jackpots of some of the most popular progressives that are currently available. To earn the highest amount possible, you will need to collect three growing Starburst wilds.

Despite this, the video slot known as “high-paying game” is one of the most played games at online casinos and is considered to be among the most popular. Starburst will always be one of the most sought after pokie slots in the industry for Online Casinos in Australia. Players can immerse themselves in hours of fun with this classic slot!

In What Way Does Starburst Set Itself Apart?

Starburst kept to its roots and didn’t evolve or change just because the world is changing. You can say it remained true to itself, which many players appreciate. Playing Starburst is like a trip down memory lane due to its classic features that not a lot of pokies today have.

For a pokie that has been lurking around the market since 2012, we have to say that we are more than impressed with the outcome of how this game is still being played to this day and remains one of the most popular and familiar pokie names to this date. The design remains timelessand the gameplay is smooth as silk. In terms of bonuses and innovativity, it was once the best there was, until new pokies with newer innovations came out, which means we’ll have to rate it a bit lower in these areas. Overall, we think it deserves a good 3.5/5  – due to its timelessness and capability of staying popular until 10 years after its initial release.

Does Starburst Have A Free Spin Bonus?

No, the pokie doesn’t have any free spins related bonuses. Instead, you can gain access to respins, which can happen three times. In the Starburst slot, the wild expands each time you hit it to fill the entire reel. A free respin will then be initiated, increasing your chances of scoring a significant win.

What Is The Minimum And Maximum Bet?

What Is The Maximum Amount I Can Win?

How Do I Play Starburst?

Simply place your bet by choosing the coin value and level you want to bet with and press the spin button. Once the reels stop spinning, you’ll know how much (if any) you managed to win.

Can I Play Starburst On My Phone?

Yes, Starburst is compatible to play on both Android and iOS smartphones.

Which Is The Highest Paying Symbol?

Apart from the amazing wild symbol, the ‘bar’ symbol is the highest paying out of all the symbols. You can earn up to 250x.

Can I Play Starburst For Free?

Yes, a Starburst demo version is available where you will be able to play the game without using any of your own money.

Rohan is our Online Pokies specialist at Online Casinos Australia. He has been playing pokies for years on end, and claims there's not a single game out there that he hasn't tried out. We trust Rohan to give you the best honest pokie reviews on the market.